What if you loved pumpkins? We mean really loved pumpkins. Could you grow one big enough to live in? How much would it weigh? Find out with our calculator.

From the Movoto Blog: 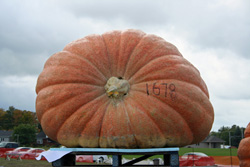 Halloween is my favorite holiday—not Christmas, nor Easter, or Plaidurday. There are a number of reasons why, most of which involve horror movies. Still, one significant reason is carving pumpkins.

When I was younger, my family would buy a couple of pumpkins, line the kitchen table with newspaper, and let my brother and I hack away at the orange gourds. It’s a tradition that has stuck. Each year I cut into a pumpkin; the bigger, the better.

This is one reason I was excited to get work on this post. Who wouldn’t want to figure out the weight of a giant pumpkin?

First, however, some back story. Recently, during one my commutes home from the Movoto Real Estate office, I read about the 23rd annual Giant Pumpkin Weigh-Off in Half Moon Bay where a California man grew a 2,032 pound pumpkin. For those who aren’t math inclined, this is literally a freaking ton.

When I discussed this with my co-workers the next day at the coffee machine, we thought up two Movoto-style questions:
•Can you grow a pumpkin the size of a house?
•How much would this pumpkin weigh?

The answer to the first question is an ardent maybe, according to giant pumpkin enthusiasts. The second questions is a bit more complicated, but after some number crunching and an intense Movoto blog team mind meld, I estimated a pumpkin the size of an average American home would weight about 431,089 pounds.

Just imagine how much pumpkin pie you could make from this bad boy.

If you’re interested in learning some giant pumpkin facts, and seeing how I figured out the measurements, pull out your carving knife and stencils, and read along.

What the Experts Think 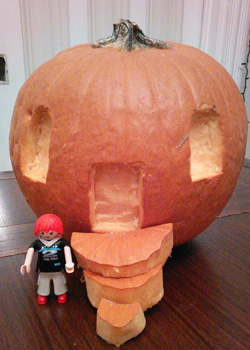 You’re probably saying to yourself: giant pumpkins are cool and all, but is it really possible to grow a pumpkin the size of your house? To help me answer this question, I reached out to a number of folks in both academia and the increasingly competitive sport of giant pumpkin growing.

The resounding answer I heard back was that it might be possible someday.

In an email exchange, Paul Licht, director of the University of California Botanical Garden, wrote:

“I suppose anything is possible, although some things are less likely than others. Given that the current biggest pumpkin is on the order of a ton or less, there’s a long way to go unless you’re thinking of a small expensive house in Berkeley.”

Ross Penhallegon, a retired professor at Oregon State University, wouldn’t rule out the the possibility either. I wrote to him and mentioned the current largest pumpkin was only about a ton, much smaller than what a house would be.

“Pumpkins have gone from less than basketball size from the 40-50-60 and 1970s, to now more than a ton,” Penhallegon wrote. “ You say ONLY a TON. That is huge compared to what pumpkins used to be.”

America’s titans of the vine were much more enthusiastic. In the past couple of years there have been world records broken left and right, which has made giant pumpkin growers enthusiastic about growing ever larger gourds. Just 10 years ago, no one thought they would grow a 1,000 pound pumpkin, much less a 1,500 pound one.

“I actually believe that we will see a giant pumpkin approach the dimensions of something like a bulldozer in the next few years,” wrote Kelly Klinker, president of the Indiana Pumpkin Growers Association.

In the next 15 years, Keller guessed pumpkins might even reach 5,000 pounds, which would definitely be about the size of small Berkeley apartment. And given the outrageous price of renting in the Bay Area, maybe it would be cheaper, too.

How Long Can You Wait?

Knowing that growing a pumpkin the size of a house was possible (if not unlikely), I set out to find out in what year we could expect to see a true Pumpkin House. I looked at the past decade’s worth of giant pumpkins and calculated that, from 2003 to 2013, the year’s winning pumpkin weighed an average of 63.18 pounds more than the previous year’s winner. (The winning pumpkin increased in size nine out of the past 10 years.)

By my calculations, you could expect to see a Pumpkin House in 8804. Mark your calendars folks, it’s going to be epic.

With the question of whether it’s possible to have a pumpkin as big as a house out of the way, let’s take a look at how I calculated the size of our imaginary Pumpkin House.

How to Live in a Pumpkin House

To figure out the weight of Movoto’s Pumpkin House, I needed to know a couple things. These were:
•The size of the average American home
•The size of a pumpkin roughly the same size as an American home
•How giant pumpkin growers weigh their massive gourds

I’ll start with the size of an average American home.

It should come as no surprise that there isn’t a database out there that tracks the average size of an American home—there are just too many of them. There is, however, data on the average size of newly constructed homes, which is about 2,500 square feet. So, at the very least, our Pumpkin House would need to be this large.

How Large Is this Pumpkin House?

Once I knew the size of an average American house, I essentially created a large box that was 50 feet by 50 feet by 10 feet. I then used this measurement to make an assumption as to the size of a giant Jack O’Lantern.

How Do you Calculate the Weight of a Pumpkin?

In my quest to learn how to weigh an imaginary pumpkin, I came across this website, which details tips on how to take your skinny pumpkin and pump it up. Additionally, the site’s owner details how you can estimate the weight of your pumpkin without actually having to weigh it. The Great Pumpkin must have been looking out for me.

There are two ways to weigh your pumpkin without using a forklift to drop it onto a scale. Both methods rely on measuring your pumpkin’s size and multiplying this by a formula that was created to help budding gourd growers weigh their prize-winning fruit. The first method is to measure the pumpkin’s circumference. The second method, known as over the top (OTT), measures three parts–steam to blossom, side to side, and circumference–and multiplies the results by a specified formula.

While I could attempt to explain these formulas better, I thought it best to link to the dedicated page where I learned how to measure pumpkins. Fair warning though: you’ll need a spreadsheet to do the calculations.

For this project, I went with the OTT method. After I entered the numbers into my handy spreadsheet, I learned that our Pumpkin House would weigh an estimated 431,089 pounds, or about 172 pounds per square foot.

Of course, if you’re planning on living inside this giant pumpkin, like some sort of gourd loving Eskimo, you’ll need to hollow it out, then bake the seeds as a gift for your new neighbors.