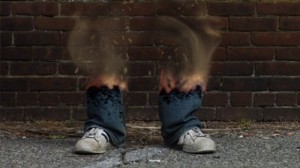 What can you do with three hundred bucks? More than just a fun bender of hookers and blow if you also happen to have a good working knowledge of digital effects and a decent amount of time on your hands. Aspiring director and effects man Michael Ashton has debuted his video Lazy Teenage Superheroes, a twelve minute short following a group of super powered teens who just want to spend their afternoon getting drunk and high but keep being interrupted by a succession of villains.

Ashton has just released the full short video. It has some faults here and there but overall it’s very well done. Hopefully we’ll see some more work from this young director.


Check out the Behind the Scenes

“Crime doesn’t take a vacation. But we do.”

-Created, directed, edited, and visual effects by Michael Ashton for $300.

Lazy Teenage Superheroes follows Ty as he tries to get his new “super” friends, Mitch, Cal, and Rick, to put down the video games, get off the couch, and use their powers to help save the world, instead of themselves.