On Friday in Brandon Florida Wes Moschetto was driving his 2011 Ferrari 458 Italia Pininfarina when a guy in a Ford F-150 pulled out and drove right over the hood. The Ferrari was only 2 weeks old and had less than 500 miles on it. The tag of the Ferrari says “2 VELOCE” which translated from Italian means “Too fast”, not anymore. Sorry Wes.

This video was shot by James Worley. James is also the one you hear on the video asking questions of Wes Moshetto.

From digging a little deeper on this we found a post on Examiner.com that places blame on Wes for the accident: 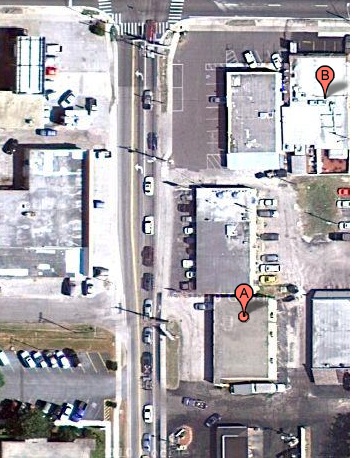 “According to a comment posted below from a witness, it appears the Ferrari was illegally attempting to pass to get into the turn lane, thus responsible for the accident. “I was at the car wash when this happened. The traffic was backed up on northbound Parsons Av and the Ferrari was passing across a double yellow line (illegal) to try and get to the small left turn lane I believe.”

You can see even in the Google maps image traffic in that lane is backed up before it opens up into a turn lane. The truck would have been exiting around the point of where the “A” marker is on the map. If someone had left an opening and waved the F-150 through at the same time Wes thought he could rev it up and take the wide open lane into the turn lane, it would fit why the Ferrari was across the double yellow and possibly even more, why the F-150 driver didn’t see him.