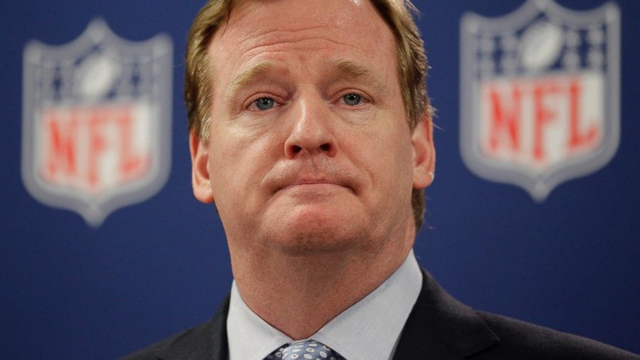 Right after the Katy Perry Halftime performance, the NFL aired an anti-domestic abuse commercial during the Super Bowl. In a response to this grievous error, NFL Commissioner Roger Goodell has issued a formal apology:

Monday, February 2nd, 2015
To employees, members, and fans of the National Football League:

After the social media outcry, we see now that people had a strong reaction to the ads played during the Super Bowl. We’ve heard your complaints and, on behalf of the NFL, I would like to officially extend our apologies for airing a commercial that in any way suggested we support anti-domestic violence. That is not, nor has it ever been, what the NFL is about.

I would like to go on record and officially state that the NFL does not not condone violence against women. That is not the spirit of NFL that America has grown to know and love.

And though our advertising does not always reflect the views of our league, we still should have caught this. In hindsight, I and our advertising coordinators should have done our due diligence. We didn’t run this ad by any domestic abusers before airing. We could have just popped our heads out of the hallway, asking literally anyone involved in the NFL. But in between covering up cheating scandals and shredding medical studies that say that football causes irreversible brain damage, this commercial slipped through the cracks. Which is a shame, because the NFL cares about abusers. And we are deeply sorry if a message form our advertisers reflected otherwise.

We’ve worked tirelessly for the past 95 years to protect abusers, we don’t want to let one little mistake undo all we’ve accomplished. And anyone that questions our sincerity can just look at the Ray Rice case.

We would also like to extend an apology to members of the NFL who have been directly affected by abuse, in that they are abusers: Adrian Peterson, Brandon Marshall, Ben Roethlisberger, Quincy Enunwa, Ray McDonald, Donte Whitner, Randy Starks, Santonio Holmes, Josh McNary, Junior Galette, Jonathan Dwyer, Greg Hardy, A.J. Jefferson, Wiliam Moore, Daryl Washington, Amari Spivey, Michael Boley, Leroy Hill, Chris Rainey, Robert Sands, Bryan Thomas, Chad Johnson, Dez Bryant, Erik Walden, Chris Cook, Brandon Underwood, and countless others who have yet to bravely come forward. The irony does not escape me that the most violent league in sports neglected to defend its most violent members.

Going forward, we only hope that football fans will see this as what it was: a temporary lapse in judgment that resulted in the airing of a commercial that deeply offended men who viciously and unapologetically beat their wives and children.

For this, I humbly ask for forgiveness. I can assure you that the NFL will never allow anything like this to happen again.

Football is the best,
Roger Goodell