We’ve been waiting for this to come out and it’s finally here. Bad Neighbour Notes launched their Kickstarter this morning. They seem like a great way to passive aggressively inform your neighbors that they’re acting douchey. Much like the fake parking tickets that have been around for a while, these notes should help your domicile be more peaceful. 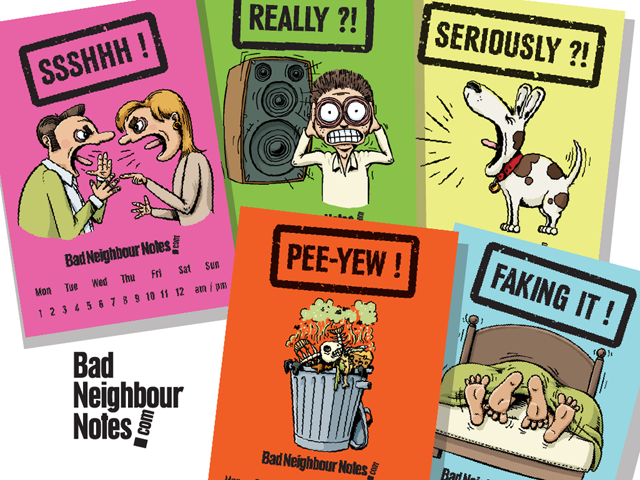 Notes like these would have been helpful a while back to deter that maniac who used Round Up to kill my neighbor’s lawn that was never mowed. Not that I know anything about that. Let’s move on.

Bad Neighbour Notes are here and they’re going to stick it to you.

Toronto – Canada – Bad Neighbour Notes announced the launch of its Kickstarter campaign today in the hopes of helping the hundreds of millions of people around the world who live next door to an insensitive and annoying neighbour. How? With a new line of discreet Post-It notes addressing the most common complaints you might have with the people who live above, below or beside you.

Maybe you have a neighbour whose sex noises mimic the sounds you’d hear if a cat fell in a cement mixer.

Maybe you have a neighbour whose idea of good music is cranking Lithuanian Death Metal at 3 am.

Maybe you have a neighbour who’s apartment smells like he’s been operating an unlicensed fish cannery filled with employees who don’t shower for religious reasons.

Bad Neighbour Notes addresses these issues, and more, with a series of full-colour sticky notes featuring unique illustrations and playfully sarcastic headlines. Each note is also pre-printed with the days of the week and time so you can simply circle when the annoyance occurred and place the note anonymously on the offending neighbour’s front door.

“Everyone fantasizes about telling their annoying neighbour off.” said Sean Mayers, creator and founder of Bad Neighbour Notes. “But most people are too afraid to confront their neighbour face-to-face. Bad Neighbour Notes does the dirty work for you without all that messy shouting and confrontation.”

The standard package of Bad Neighbour Notes sells for $9 with a bonus Not Safe For Work (NSFW) version selling for $15. The company is looking to reach its funding goal of $3,500 on Kickstarter by June 11th.

“It’s a small price to pay for a good night sleep.” says Mayers.

Pulitzer prize winning poet Robert Frost once wrote, “Good fences make good neighbours”. But the world’s best fence can’t stop the piercing sound of a Chihuahua barking at his owners as they make angry, passionate love to each other at 2 am on a Tuesday. But maybe, just maybe, Bad Neighbour Notes can.

For more info check out the Kickstarter page at https://goo.gl/hrqvnl or visit BadNeighbourNotes.com.