Congratulations to Matt K for winning the gift card. The joke:

A husband and a wife started a land surveying company.
But the wife didn’t know any of the hand signals, so the husband showed her the ropes and they went out on their first job.
The wife looks through the telescope-land-surveyor-thing and watches her husband signal to her:
He points to his eye and says “I” – Points to his knee and says “need” – Gestures a hammer and says “Hammer”
The wife quickly responds back with:
Points to her eye – grabs her left tit – and points to her strange beaver.
The husband is confused and drives over to her and asks “didn’t I teach you the hand signals?” She nods, as he asked “well what did I say?” “I need a hammer” she responded. Well then what in the hell did you say?
“I left it in the box”

Look at that, he even managed to work strange beaver into the joke! Congrats Matt! 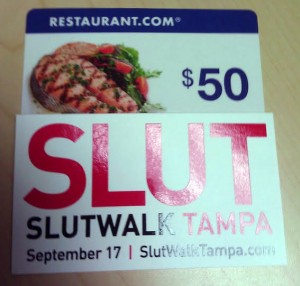 The awesome coordinator from the Tampa SlutWalk gave us another $50 restaurant.com gift card so you know what that means, we’re giving it away.

The setup is simple, tell us a funny joke. Best joke wins!
Deadline will be 9pm EST, winner announced shortly there after.

Send an e-mail with your joke to contest@strangebeaver.com

If you don’t win this contest don’t worry, we will be doing a few more over the next couple of weeks. You can also get a gift card from the SlutWalk Tampa webpage. A $20 donation will get you a $50 gift card. How freakin’ awesome is that?

*Note*- The gift card is only valid in the Continental United States so for our fans in other countries we apologize but this won’t work for you. We will try harder to include you in our next contest. But you can still send us a joke 😉