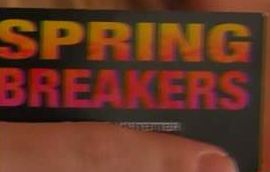 A couple weeks ago we were sitting around reading the news, doing our general surfing when we found a press release that sparked our interest. It seems that James Franco and Selena Gomez are gearing up to film a new movie in the Tampa area and a casting company was looking for extras. Generally not something that would interest us, I mean, come on, Franco was a bad ass in Deuces Wild and Spiderman, but this movie looks like a snore fest. The thing that stood out in this press release was that the casting company was looking for young men and women in their late teens to early 20s to play extras in the film, primarily for a couple of beach scenes. In the press release they asked for anyone interested to submit their info and pictures via e-mail to a generic Gmail account. In the release they even stated “swimsuit poses are a plus”. We thought, that’s pretty stupid, any jerk could set up a Gmail account with a slight misspelling and receive submissions from people who accidently type the wrong address and get a bunch of pictures of young people in beachwear. About that time a light bulb flickered and off to Gmail we went.

We set up a handful of different accounts, all with a slight misspelling from the original being used by the casting company, then sat back and waited. Our not so optimistic staffers thought it was a waste of time and we wouldn’t receive anything but after about 10 minutes we received our first submission. As of this morning we’ve received over 200 e-mails of young men and women in various states of undress. As an added bonus, there was a handful of eager young ladies that sent pictures which were probably a little more adult oriented than what the casting company would have wanted.

Now before people get mad at us and start calling us mean, we were nice enough to inform the submitters they had the wrong address and even gave them the correct address. But we did find it amazing how many people, especially young women, would voluntarily send their contact information and pictures (some rather scantily clad) to an e-mail address without first double checking it. This is how senators get caught in scandals people. As a PSA, double check who you’re emailing to before you hit send. And maybe casting companies could use an e-mail address that is a little more secure.

Here’s some of our favorite pictures from the entries and since most of us have done some theatrical work ourselves we will offer critiques on the dos and don’ts of casting submissions. (BTW, we’re not going to show you the pictures of young girls in bikinis so don’t ask, perverts):

Really? This is all we got, an impressive portfolio and a 67 pixel picture. Dude, at least give us something we can see.

Self shot mirror pics are cool for Twitter but don’t work too well for casting. You’re in a locker room, surely you can get another guy to take a shirtless picture of you flexing without it seeming too overtly homoerotic.

More little tiny pictures along with a mirror shot.

This guy was pretty cool when we explained what was going on. He has a cool style and would be great for a part and yes we’re saying that because he looks like he could kick our asses.

Cute right? You should have seen the other picture that was too NSFW.

This dude rocks. Had an impressive portfolio and has been in some pretty big name stuff. He’d be perfect as a police officer or maybe that friendly neighbor who offers up some elder wisdom to the young troubled star at a critical point in the story line.

Another fine example of a good head shot

Not so much. The enthusiasm is there but maybe pose a little next time. Come on, Vogue!

This guy has sent us 5 friend requests from facebook even after we told him he had the wrong e-mail address.

What has two thumbs and likes to go camping? THIS GUY!

When you have a gender neutral name, try submitting a solo picture so the agent knows who they’re looking at