Do you think your favorite show is the most popular around? Movoto did some digging and crunched the numbers to see what people are really watching. And the results are a little surprising. Can someone call Delaware and tell them to get with the program?

Check out the map below and how they got the results. 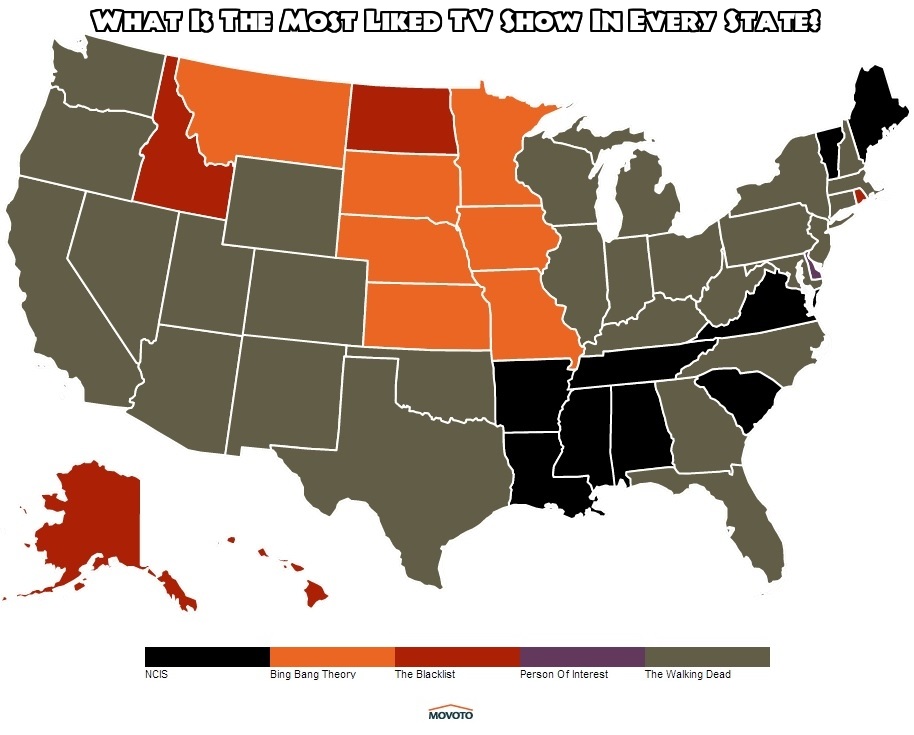 A healthy serving of television is as much a part of the American diet as breakfast cereal. There are literally thousands of channels, and that’s not even to mention all the options popping up online.

Here at the Movoto Real Estate Blog, we like to rank things, and if you show us a color-coded map we’ll be happier than a “Game of Thrones” fan after the Purple Wedding. That being said, we decided to make a map and narrow down our choices from 1 million to only those most popular shows right now in every state, based on Facebook Likes.

You can see the results above, and we’ll go into more detail below.

How We Created This Map

To put this map together, we had to don our “NCIS” hats and do some serious investigating.

We researched the number of Facebook users in each state who have Liked, with a capital L, each of the most popular shows on today.

In choosing these shows, we went with the top 10 network shows for 2013 by viewership numbers, the top basic cable show (“The Walking Dead”), and the top premium show (“Game Of Thrones”).

After we wrapped our investigation, we put on our nerd pants (which are kind of like the blue ones Howard wears on “The Big Bang Theory”), popped the data into a spreadsheet, did some number crunching, and came up with this awesome map.

Now that you’ve seen the behind the scenes of this map, let’s take a closer look at each of the five most Liked shows, starting with the absolutely killer “The Walking Dead”.

It almost doesn’t seem fair to include “The Walking Dead” on this map.

Not only is it a post-apocalyptic horror drama about flesh-eating zombies and survivors, but it’s also on AMC, which for those of you who don’t know, is one of those magic network that spins screenplays into gold.

This show was the most popular in a vast majority (29) of the states. There’s no pattern here, we promise you. It’s just a good show.

If you’ve ever seen an episode of this show, you know that it will keep you on edge—and in nine states across the nation, people’s blood pressure must be skyrocketing.

What do you get when you add two physicists, an engineer, an astrophysicist, and a waitress? Well, aside from your run of the mill dinner party in San Francisco, you get “The Big Bang Theory”.

Surprisingly, the show wasn’t the most popular in Nerdville—or, rather, California—but it was the most Liked out of any show in seven states:
•Iowa
•Kansas
•Minnesota
•Missouri
•Montana
•Nebraska
•South Dakota

The folks in five of 50 states are crazy for this new NBC drama.

In Alaska, 6.48 percent of the total population have Liked “The Blacklist” on Facebook. That’s a larger portion of the population than either states that Liked “NCIS” or “The Big Bang Theory” the most.

Apart from Alaska, North Dakota, Rhode Island, Hawaii, and Idaho all also Liked “The Blacklist” more than any of our other shows. And what do these places all have in common? I don’t know—ask James Spader?

Delaware may be one of the smallest states, but when you consider the fact that 8.02 percent of the total population there Liked “Person of Interest” on Facebook, well, that’s like 70,000 people. That’s a lot of John Reese fans.

It was the only state that Liked this show more than any of the other shows, but hey, you’re still new, “Person of Interest”. No need to get all paranoid, create a super powerful mass surveillance computer system to accurately predict viewer behavior, and then start offing people who find out about it…

In the Game of Ratings, You Win Or You Die

In this Game of Ratings, there was a clear favorite in “The Walking Dead”, some that could use a bit of a “Resurrection” with the Facebook audience, but, overall, each of these 12 shows are winners, as they’re all the most popular on air today.

And as we all know, in the Game of Ratings, you either win or you die… and by die, we mean you won’t make it onto our awesome, colorful map of America’s most Liked shows. Sorry,
Sister Wives”. Maybe you just need more zombies.