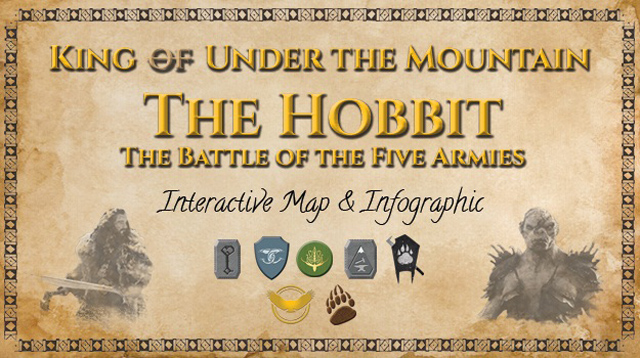 It all began with the words, “In a hole in the ground there lived a Hobbit.” The Hobbit trilogy is coming to an end this year with the final film, The Battle of the Five Armies, and we got to thinking…just how does one have a battle with five armies anyway? That sounds confusing! We explored the words of J.R.R. Tolkien himself and used them to create this interactive battle map and companion infographic. They’ll give you a detailed play-by-play of the final chapter in this epic fantasy!

A couple of final notes before we get into the good stuff. First: All of the animation, information, and battle movements in this piece are derived from the novel’s version of events, not the film’s. Next: We’ve left out some minor details for the sake of brevity – Tolkien may be many things, but brief he is not. Finally: This post contains MASSIVE SPOILERS for The Battle of the Five Armies, which is based on a book that is 77 years old. Read on at your own risk:

Check out the infographic below

And check out the interactive graphic on Shirts.com