“The Walking Dead” is a nearly unstoppable cultural phenomenon. The television show is setting unprecedented records, and now the undead nightmare can’t be contained to simply one show. A second spin-off show, set in a new city, with a new batch of survivors, is on the way.

So, all of the alive and breathing folks at the Movoto Real Estate Blog decided to throw AMC a bone and use numbers and math and all the luxurious tools people can use when they don’t need to fight for their lives, to help narrow it down a bit.

And what do you know? There must be something magical—or unlucky—in the water in Florida, as their fleshy, undead metrics have chosen Orlando as the perfect location for the next show.

Check out the map and details below on how they came up with this location: 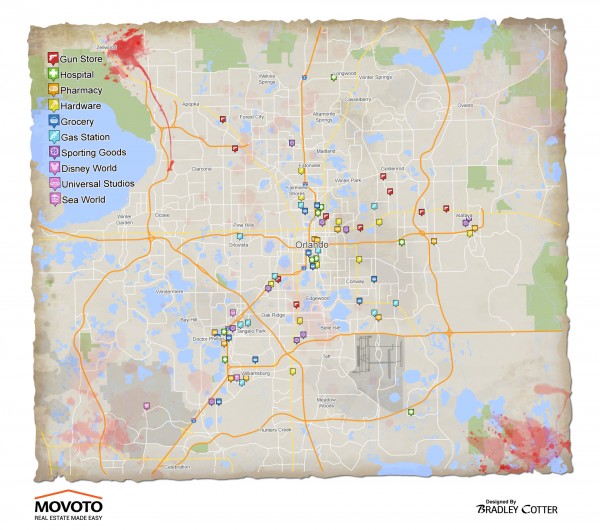 There are some basic criteria we used to help figure out which city “The Walking Dead” spin off should take place in. We broke it down into the following categories and used Yelp to rank the top 100 cities according to how many locations they had per the city’s population:
•Gun stores
•Hospitals
•Pharmacies
•Hardware stores
•Grocery stores
•Gas and service stations
•Sporting goods stores

If you’re going to survive a zombie outbreak, you need resources. You need guns to protect yourself, hospitals for the sick and dying, pharmacies for medicine, hardware stores for hammers and chainsaws and all those fun zombie slaying things, grocery stores for food, and cars for those much needed escape vehicles.

Sporting goods are also important so people can get baseball bats. Comic fans, you know what I’m talking about.

So, what this all means is if we want our characters to live longer than the first season, they need to have some access to basic necessities. Check. Got those covered.

But this only got us halfway there. As any good fan of “The Walking Dead” will know, the big cities were the first to fall. People flocked to Atlanta, and look what happened. It was bad news bears, to the max.

Because of this, we were prepared to take the largest population cities in the top 10 and toss them out. They died first. Dead. Gone. Sorry, Houston, New York, and Los Angeles. You’re infected. Better luck next zombie apocalypse. None of these cities ranked in the top 10 anyways, which kind of proves our line of thinking has merit.

Either way, this isn’t a democracy, it’s a me-tatorship, so deal with it.

And of course, Atlanta doesn’t get to be the spotlight of the spin off, so that was tossed out as well. (Though it did come in eighth on our list).

Orlando. Elder Price of “The Book of Mormon” would be happy. Orlandooooooooo.

Orlando ranked first in three of our time-tested Survivor Categories, and using our Big Deal Score ranking system, we determined it’s the best city to be in during a zombie outbreak.

It has all the resources people need to survive this brave new world. That in itself helps make Orlando a great candidate for surviving a zombie outbreak, but it doesn’t necessarily mean that setting “The Walking Dead” there would make for interesting television.

So let’s dig a little deeper.

The Scariest Place On Earth

Orlando gives the show myriad interesting possibilities. The original show started following Rick Grimes and the search for his family. But what if Rick was on vacation and didn’t have access to his house or the police station?

What if Lori didn’t have to yell at Carl to get back in the house, because there weren’t any houses nearby… and they were stuck in Space Mountain instead?

To take that a step further, what if ALL the survivors were all on vacation? Their extended families aren’t anywhere close by. No communication. Nobody knows who is alive or dead. It’s some intense horror, that’s for sure.

The survivors would be immediately thrown into a situation where they have to survive with people who they don’t know and are from totally different backgrounds, lifestyles, and ages.

And is there anything scarier than a whole city full of undead, screaming babies?

Orlando also allows for more diverse and international faces to become part of the story. Orlando is such an international resort destination, that it really would provide a great canvas for all types of people (i.e., not just native Floridians) to have part of the zombie-slashing fun.

Universal Studios already has “Walking Dead”-themed horror nights, though that could get confusing if the outbreak started during Halloween and you didn’t know who was a zombie and who was just wearing makeup…

And last but not least, a little truth. Back in 2012, there was the bath salt attack in Florida, leading people into a new form of zombie hysteria. And Florida actually had three cities in the top 10: Orlando, Tampa, and Miami, so we knew it had to be somewhere in the Sunshine State.

Just think about all the fun the show could have with swamps and alligators. Zombie-gators? Hell yes, count me in.

But okay. Still not convinced? Become a math zombie and try chewing on some of these tasty numbers.

The only category that Orlando didn’t make a killing in is hospitals, where it ranked seventh (one for every 1,847 people). And after the hospital this season, do we really want another hospital-based arc anyways? Yeah, didn’t think so.

And actually, Orlando is a better setting for the “Walking Dead” universe than Atlanta was. Take a look at this.

Apparently, our zombie-science calculator is pretty accurate, as Atlanta ranked eighth on our list of places best suited to survive the dead coming back to life (maybe Robert Kirkman used the same lines of thinking that we did?).

Atlanta’s best score was in gas stations, where it placed third, with one gas station for every 1,842 people. This doesn’t quite explain why Rick and company always seem to be looking for gas…

Atlanta also ranked in the top 10 for grocery stores and for pharmacies, but was a far cry from the zombie-slaying haven that Orlando was.

The City Of Dead Angels

It’s heavily rumored that the spin off might take place in L.A. TV Line reported this back in December, but nothing is official yet.

But would L.A. be a bad location?

According to our numbers, it wouldn’t only be bad, but it would be one of the worst cities for the next “Walking Dead” setting. L.A. was 95th on our list out of 99 cities that we looked at. Almost last place. Almost the bottom of the barrel.

The people there simply wouldn’t survive very long. One or two seasons max. Next city choice. Nothing to see here. Move along, folks.

There are a few reasons Orlando isn’t perfectly perfect, but it’s as close as we could come. It is set in the South again (my old hometown, Rochester, NY, was the only Northern city to make it in the top 10), as opposed to spreading out a little geographic diversity in the series. There’s a lot of water, meaning your escape routes are limited.

But it just brings so much to the table. We at Movoto have picked Orlando as our best data-driven choice. What do you think? Where would YOU set “The Walking Dead” spinoff?