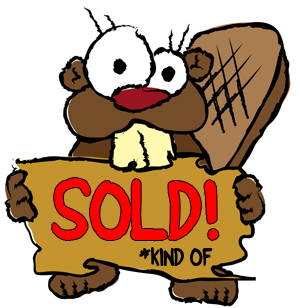 As many of you know there’s been a lot of stuff going on here on the back end and we wanted to take a minute to bring everyone up to speed. We wanted to tell you last Friday since it was our 5 year anniversary but we couldn’t make the announcement then so we held off on the annual State of the Beaver Address and everything until we could give you all the details. SB has officially been sold. Now don’t go getting sad and saying goodbye, it’s just more of a restructuring and moving the parent company from a DBA to an Inc. So what does that mean for you the end user? Not a thing really. The site will stay the same but just be run a bit differently, and add a bit more legitimacy. I was told we needed to make a public notice of the move so consider yourself noticed. If you’re interested in the gritty details keep reading, otherwise please return to your normal browsing routine.

You guys know that we’re pretty transparent with everything that goes on, after all, this site is as much yours as it is ours. So long story long, over the years there have been a number of offers to buy the property and late last year there was a really (REALLY) serious offer that was very hard to turn down. I can’t give too many details but it was a large company that runs a network of web sites ranging from fashion and style to gaming. Some of the sites are already media partners of ours. They had their eye on our site and although their funding may have meant great growth for the site, it would also mean the site design and structure would be gutted. A lot of the things I’ve fought against for years would be implemented (like pop up windows/ads, user data mining, etc). Over the past 5 years this side project of mine has been a lot of fun and it has grown beyond anything I had expected. Our fan base has been so awesome and supportive and I couldn’t in good conscious watch everything be taken away from you guys just so a company can use you like that. I wasn’t ready to walk away from Strange Beaver and turn my back on everyone just to make a quick buck. So I’m sorry to say, I’m not going anywhere and things will stay somewhat the same. Nothing against the company that made the offer, we’re still partners and still swap stories, but they can go do their thing and we’ll keep Beavering on doing ours.

So if we didn’t sell the site what’s with the logo saying it was sold? Well years ago I owned a technology business (still do actually). It was a side project doing consulting, computer repair, install work, webdesign, hosting, etc. The company was a DBA and when I started Strange Beaver the site just fell under the business license I already had in place like all the other sites I was already working on. Over the years as Strange Beaver has grown, and other sites/projects were sold off, it started to become apparent that running it under a DBA wasn’t really the best idea. Especially when you start adding in things like advertising, expenses, and taxes. Not to mention threat of legal action which happens from time to time. It made more sense to add a layer of insulation to my personal life by forming a company and ‘selling’ all the assets of McTek to that company. The name ‘Umbrella Corporation’ was a bit too obvious so I went with something more fun ‘OMG’. As of last night Orange Media Group is now active.

This morning, Strange Beaver along with all the assets of McTek has been ‘sold’ to OMG. With it includes a web hosting cluster, all domain names held by McTek, a webstore and clothing shop, all camera equipment, computers, and licenses.

So that’s the gist of it all. Not a big change from the user perspective but on paper it looks awesome, and hopefully a bit more legitimate.

If you have any questions please let us know

Keep being awesome
Thanks
Scott