Captain America has a fat pad right in the heart of Manhattan, but how much did Shield have to shell out for those digs? The gang over at Movoto Real Estate Blog crunched the numbers and figured it out. Check out the listing and a break down of how they got the price below: 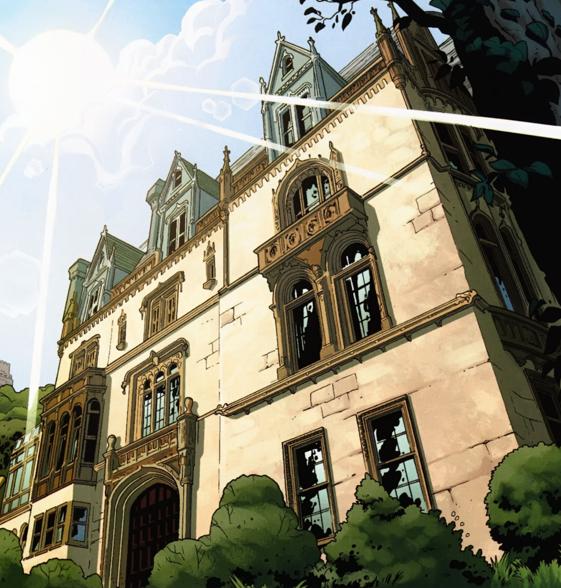 Marvel’s patriotic super soldier Captain America returns to the silver screen this Friday, and the release of “Captain America: The Winter Soldier” seemed like the perfect excuse for me to once again combine my superhuman love of comic books with my cover identity of a Movoto Real Estate blogger.

The last time I did this, I found the value of the Xavier Institute for High Learning, better known as the X-Men’s X-Mansion. What could I value that made sense for Marvel’s legendary shield-slinger, though? I decided to tackle an evaluation of Cap’s most famous home: the Avenger’s Mansion.

Using my own super powers—finding the price of fictional real estate, which is admittedly far less cool than incredible strength or eye lasers—I determined that, if placed on the market today, the Avengers Mansion would command a cool $113,175,876 from prospective buyers. For that price, you’d get a property perfect for housing your own super-team (but have to supply your own costumes).

How did I arrive at this figure? I’ll assemble all the facts for you below, as I explain the origin story behind my evaluation of Earth’s Mightiest Home.

How I Did It

Unless you’re trying to value a hotel, there are just three main things you need to find in order to put a price on a price of fictional property—whether it’s Steve Rogers’ house or Mister Rogers’ house. These things are:
•The property’s size
•Its location
•The price of similar properties

To get the answers to these questions, I had to travel all the way back to 1963 and the other side of the country from Movoto’s own HQ in the Bay Area. Fortunately, although I don’t have time travel or flight powers, I do have the Internet.

Where The Avengers Assemble 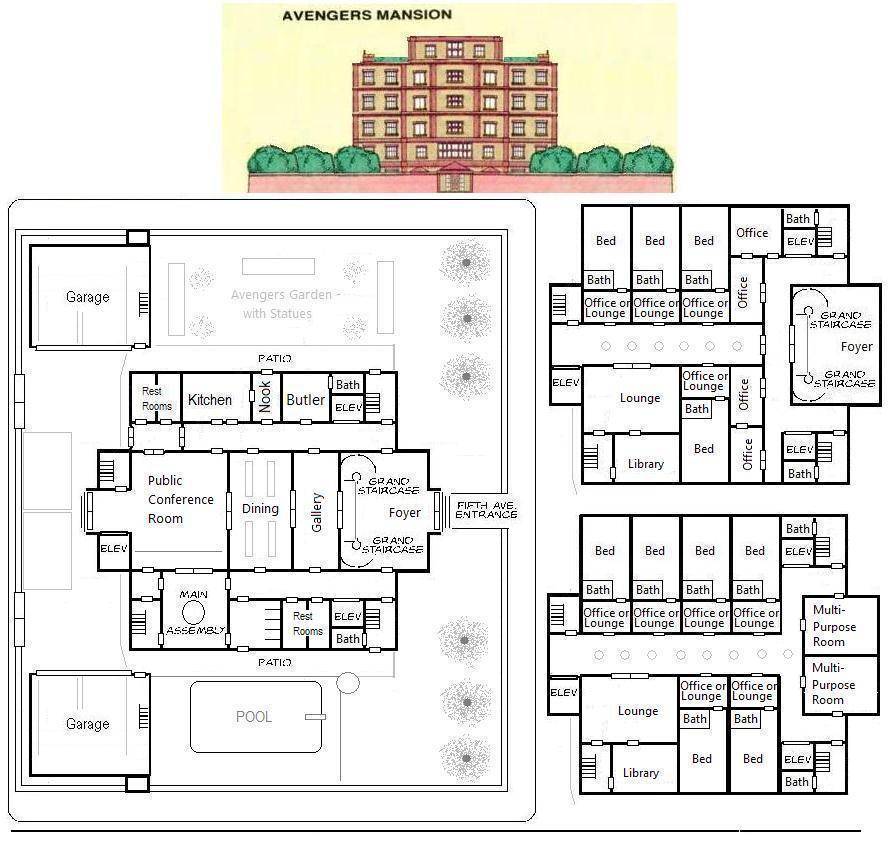 The Avengers Mansion made its first appearance in “Avengers” #2, published in November 1963 and started out its storied structural legacy as the Stark mansion (no, not the one located in Malibu, CA that we already valued and figured out the yearly bills on). I already knew that this lavish property was built by famed inventor and businessman Howard Stark, and was then passed down to his son, Tony, who eventually donated it for use by his fellow Avengers. I also knew it was absolutely huge, but not exactly how huge.

In order to determine its size, I turned to the vast online world of comic book fans, some of whom had at one point scanned an entire (official) floor plan for the mansion and offered it up for dissection. This, along with wiki entries such as the one at the Marvel Database, provided me with a wealth of in-depth details about the property. Details such as the number (and type) of rooms it contained, and even many of its amenities.

Despite all this detail, there was no actual size in sight—apart from the building comprising three above-ground floors and three basement levels. That was okay, though, since I never go into these evaluations expecting them to be easy. That’s why I’ve spent so much time honing my math and measurement skills.

Using the floor plan, I was able to take the size of a standard interior door on it (32 inches) and measure out the entire building. While their interior layouts were a bit different, all three above-ground floors were essentially the same size: 6,393 square feet apiece. That gave me a total of 19,179 square feet for floors one to three. Two of the basements were also nearly identical to one another and totaled 13,216 square feet. The final sub-basement, which houses (among other things) an underground transit vehicle, totaled 10,329 square feet. Adding all those up, I determined that the Avengers Mansion comprised 42,724 square feet, not including its wonderfully manicured grounds or any outbuildings.

Where is it, though? Unlike its square footage, that fact had thankfully been thoroughly documented.

You Won’t Find This On Google Maps 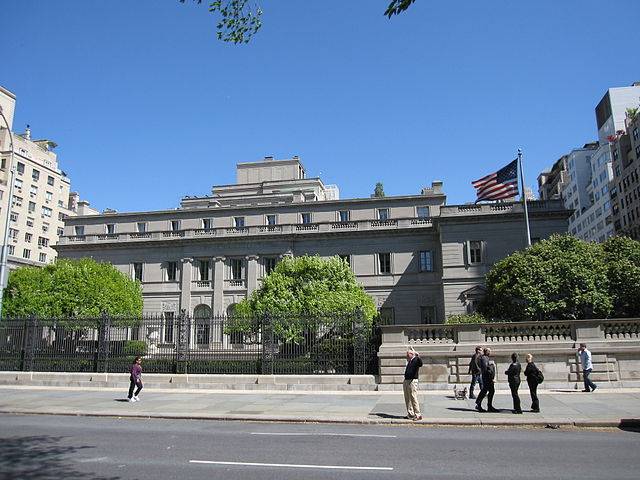 I’ve always wondered why superheroes such as the Avengers and the Fantastic Four insist on having their headquarters in densely populated cities full of mere mortals. It just seems like a recipe for disaster. Still, the likelihood of villains showing up on their doorsteps to wage battle doesn’t seem to have factored into the decision to base the Avengers out of a mansion smack-dab in the middle of Manhattan.

Okay, so it was actually “Avengers” co-creator Stan Lee who made that decision, basing the team’s compound on a real building, a museum called the Henry Clay Frick House, also located in Manhattan. Unlike its inspiration, though, the Avengers Mansion is located at 890 Fifth Avenue (or would be, if it actually existed) according to the comics. That made the next (and final) part of the evaluation process pretty simple.

Fun fact before that: The mansion is actually 35 feet farther from Fifth Avenue than when Howard Stark built it, due to Avengers Thor and Hulk deciding to move it back for “added privacy.” I guess the 12-foot omnium steel wall wasn’t enough?

The High Price Of Being A Hero

With the mansion’s size and location figured out, I just had to find the price of similar properties in the neighborhood to get my final amount. Diving into the world of Manhattan real estate, I quickly discovered that 42,000 square foot private mansions aren’t exactly the norm in this neck of the woods, let alone on Manhattan island.

What I was able to find were several large private homes in the area of Fifth Avenue and 70th where the Avengers Mansion would be. By using my mathematical powers on the prices and sizes of these properties, I arrived at an average cost per square foot in the neighborhood of $2,649. To put that into perspective based on past super-evaluations, Tony Stark’s place on Point Dume in Malibu would cost $4,690 per square foot, while Thor’s Asgardian castle would be priced at a (slightly) more reasonable $820 per square foot. 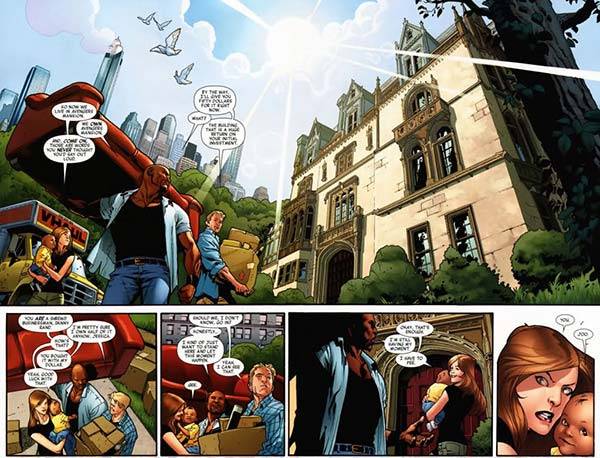 I fortunately didn’t need Tony Stark’s intellect to figure out my final price. Multiplying the Avengers Mansion’s square footage (42,724) by the price per square foot ($2,649), I got a total value of $113,175,876. Now, bear in mind that this figure doesn’t include any furnishings or more fantastical possessions of the Avengers. Still, it would get you a perfect space for starting your own super team, including an ultra-fortified meeting room in which to assemble.

To bring this all back to Captain America, I figured out that in 1941, the year he first debuted in “Captain America Comics” #1, the Avengers Mansion would have cost about $7.1 million. That’s what I call a super investment.