The helpful gang over at Movoto Blog did some digging and crunched the numbers to find out which states liked which sci fi franchise. In the battle of Star Wars vs Star Trek, we of course believe Star Wars is far superior, so this list and these maps simply reinforce why we shouldn’t live in Oregon 😉 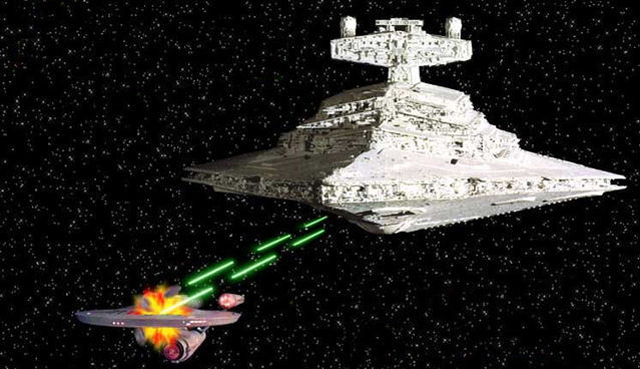 Some may tell you to live long and prosper. Others may wish that the Force be with you.

These famous lines, as well as many others, are just some of the reasons “Star Wars” and “Star Trek” have become two of the most iconic and essential science fiction franchises in history.

Still, there’s a bit of a rift between these two factions. Some stick with Klingons and Ferengis, while others are all about the Wookies and Storm Troopers, and there’s often a little bit of a rivalry between the sides. So, where is each fandom strongest?

That’s what the Movoto Real Estate Blog set out to find, and, as you can see by the maps, we didn’t even have to go as far as the Dagobah System or Risa to find it. What spurred our curiosity? Well, we may be in the business of selling houses, but we’re also really into sci-fi. Seriously, have you seen our fictional evaluations?

If you want to find out how we did it, all you have to do is go on to the next section.

How We Created These Maps

We turned to everyone’s favorite social media site, Facebook, and checked what percent of a state’s population “Liked” each of the major franchises.

Unfortunately for Trekkies, it became pretty obvious pretty fast that “Star Wars” reigned supreme, winning out in every single state, most of the time by a ratio of 3 to 1.

Then, we added up the total Likes and found out which state had the highest percent of people that Liked either one franchise or the other, giving us a list of which states were the most star-struck, so to speak.

Why don’t we look a little closer at the 10 states that liked their sci-fi essentials the best. 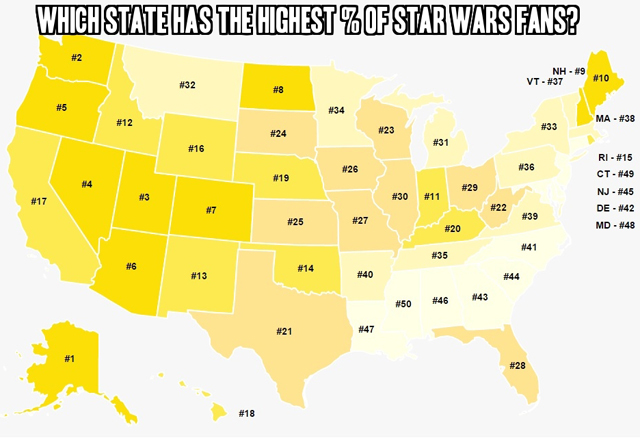 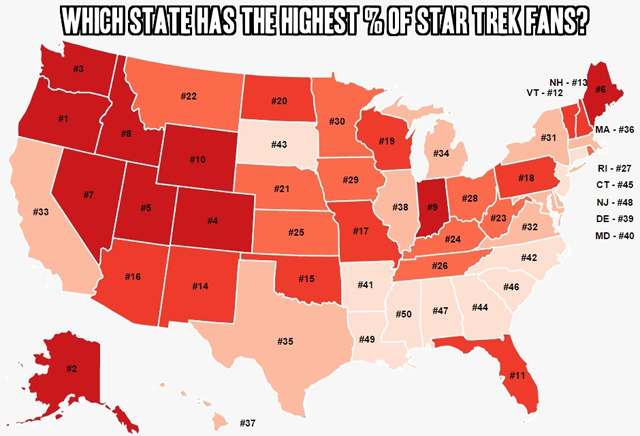 1. Alaska: Are Those Northern Lights Or Cloaked Romulan Vessels?

Maybe it’s because Alaska looks like Hoth for a lot of the year. Maybe it’s because you have the best view of the stars out of anywhere in the U.S. No matter the reason, this state was more into these two iconic franchises than any other place on our list.

Ranking first in “Star Wars” fans, almost 4.8 percent of people here Liked the trilogy (yes, we said trilogy, wanna fight about it?) and were willing to brag about it on Facebook. The “Star Trek” fans showed well here too, though, ranking second in that category.

In all, 6.87 percent of people in Alaska Liked one, or both, of these fine series. After all, they’re the perfect things to rewatch on a cold winter’s night.

Who would have guessed that Alaska’s closest neighbor in the states would be our No. 2? Maybe this is just something those folks up north understand better than the rest of the states.

Ranking No. 2 in “Star Wars” fans, Washington had 4.46 percent of the population showing their pride for the movies online. Likewise, this place ranked No. 3 for “Star Trek” fans, so no matter the type of Sci-Fi, these folks are probably all over it.

In fact, a strong 6.54 percent of the population of the state Liked either “Trek” or “Wars”. Well, with conventions around like SpoCon and Norwescon, that probably makes a lot of sense.

3. Oregon: Not Sure How Klingons Would Feel About All The Fedoras

Well, it seems like this might indeed be a Northwest thing, because Washington’s closest neighbor, Oregon, is all about the sci-fi too.

Now, if you want a state where Kirk, Picard, and maybe even Janeway get some love, Oregon is the state for you. This place had the most Trekkies per capita, with almost 2.1 percent of the population Liking these boldly-going explorers on Facebook.

Of course, “Star Wars” fans also made a pretty strong showing here, ranking fifth for that category. A full 4.12 percent of the population proclaimed they were fans of “Star Wars”, which meant a total of 6.21 percent of people were fans of at least one of these two franchises.

Breaking away from the Pacific a little bit, we get our No. 4 state for fans of these very essential sci-fi series: Utah. We guess they really do live life elevated here, all the way to the stars.

It was pretty clear that “Star Wars” was the chosen franchise here, with 4.27 percent of the population declaring their Facebook love for Luke, Vader, and Yoda.

However, there were still many Trek fans here, and the total of locals who Liked one or the other of these series came out to 5.93 percent.

If you wonder where all these sci-fi nerds (and we say that word with pride) might be hiding, just head to CONduit or Salt Lake Comic-Con and you’re likely to see more than a few of them there.

Many stars come to Las Vegas, but it seems that it’s not just Sin City that loves the stars back, particularly the “Wars” and “Trek” variety. In fact, 5.78 percent of people in the state of Nevada were fans of one franchise or the other on Facebook.

To break that down a little further, there were a ton of “Star Wars” fans here, with 4.22 percent of folks being fans of Jedi and Sith. That’s the fourth highest percentage on our entire list.

Nevada had plenty of “Star Trek” fans as well, the seventh most in the nation, with around 42,000 fans across the state. Now, we’ll just have to find out how many can actually give a proper Vulcan salute.

6. Colorado: Plenty Of Forests, But No Ewoks

This state has a convention called StarFest. That alone should indicate this is a sci-fi friendly place, especially considering that this con hosts “Star Trek” actors and sports a “Star Wars” inspired logo. Come on, what more is there to say?

Well, actually, we could say a whole lot more. Colorado had 5.61 percent of its population liking one of the iconic two franchises online. In particular, there were a ton of “Star Trek” fans here, ranking it the fourth most Trek-friendly state in America.

Not to be outdone, “Star Wars” fans showed their pride in full force, with almost four percent of folks Liking the movies on Facebook.

7. Arizona: Just Watch Out For The Sarlacc

Now, onto a state that more closely resembles Tatooine than any of the others on our list. Though, we haven’t seen any Sarlacci there… yet. We’ll have to ask one of the over 260,000 admitted fans of “Star Wars” that live there if they’ve seen any in their travels.

Besides being home to the sixth most “Star Wars” fans, this place just liked these sci-fi icons in general. More than 5.5 percent of residents of Arizona Liked one of the two, or both, on Facebook.

Strangely enough, this place was a lot less “Star Trek” friendly than you might think. The state only ranked 16th for percent of people that were Trek fans, at a mere 1.44 percent. Oh well, at least they won’t be buying any Tribbles then.

8. Maine: A Trek To The Northeast

The Pine Tree State might want to consider changing its nickname to The Sci-Fi State after seeing this ranking.

And for good reason, considering that this place had 5.42 percent of its population Liking either “Trek” or “Wars” on everyone’s favorite social media site.

If your sensors are picking up an anomaly, that’s because this state had a pretty high number of “Star Trek” fans, even with all those “Star Wars” fans milling about. In fact, Maine ranked sixth for the percent of people who Liked “Star Trek” on facebook.

We did mention “Star Wars” fans, and there are plenty of those here too. So many, that over 3.7 percent of people in the states are willing to brag about their lightsaber love online.

9. New Hampshire: The Granite State Is More Solid Than Carbonite

Are you surprised to see New Hampshire on this list? You really shouldn’t be.

This state had 5.26 percent of the population Liking either “Wars” or “Trek” on Facebook, so you can bet that folks here are fans of Q and Qui-Gon alike.

“Star Wars” fans certainly won’t be alone in this state, considering there are plenty of them here. The 3.8 percent of locals who call this place home and call “Star Wars” the best thing ever were enough to rank this place the ninth most “Star Wars” friendly state.

Admittedly, New Hampshire wasn’t as hot on “Star Trek”, only ranking 13th for that show, but there were still plenty of fans here who will likely be arguing Picard vs. Kirk until the day they die.

Back to another state that sometimes looks like Hoth, our No. 10 sci-fi state is definitely one to be reckoned with.

Fully 5.23 percent of North Dakota’s Facebook-using residents Liked either “Wars” or “Trek”, with most of them being on the “Star Wars” side of things.

In fact, this state had the eighth most “Star Wars” fans on our list, with 3.78 percent of the population Liking the trilogy on Facebook.

The “Star Trek” fans here were in much shorter supply, ranking a mere 20th on our list. Still, for a state so low in population, it still beat out places like New York and Illinois.

If you’re wondering how all these sci-fi fans are managing to get by out in the cold that is North Dakota, you’ll have to go check out ValleyCon in Fargo this October. You’ll definitely find that sci-fi lovers are abundant there.

To Boldly Go…To The Moon Of Endor

No matter which side of the “Trek” vs. “Wars” argument you’re on, it’s pretty easy to admit that the two franchises have changed the face of sci-fi forever.

Where would we be without the iconic “Khuuuu-krshhhh” of Vader’s helmet or the cold logic and pointy ears of Spock? Where would science fiction have gone without the tricorder or the Millenium Falcon?

It’d be a whole different landscape, that’s for sure, and fans of both game-changing series can agree on that much. So live long and prosper, friends, and may the Force be with you.