This fun film is finally available on iTunes and Amazon, or at Family Video, Best Buy and even the handful of Blockbuster locations that still exist! 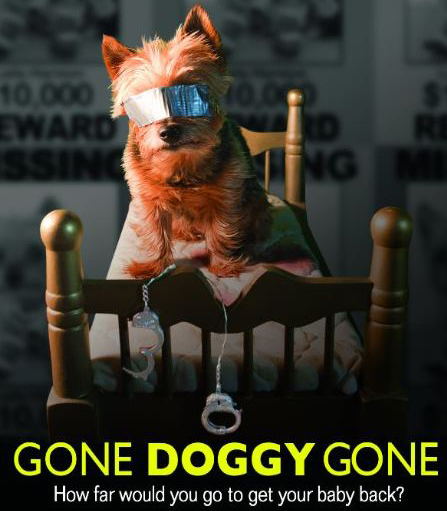 We had the pleasure of seeing this film a few weeks ago and it was great.

Gone Doggy Gone is a comedic feature about a couple stuck in a lack-luster marriage who treat their dog like a baby. Working the grind in LA they leave little time for each other, and what free time they have they spend doting on the dog… until it gets kidnapped. What ensues is an outlandish cat-and-mouse adventure as they hunt down the kidnapper, enlist a schlubby PI, find a renewed love of each other, and conquer their fear of parenthood.

*If you want to read our review on it keep reading, but there are spoilers so be warned!* 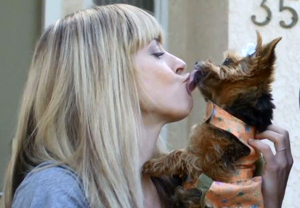 The movie starts out pretty innocently as it introduces the characters. After the first few minutes you start to really dislike Abby Harmon (Kasi Brown) and Elliot Harmon (Brandon Walter). They’re a young professional couple that seem to be putting their focus into work and their adorable little Yorkie ‘Laila’ instead of their relationship with each other. Sure they love their dog, but like the lady in my neighborhood that walks her chihuahua in a stroller, Abby and Elliot are the kind of people that love their dog a bit too much. They have a closet full of outfits for Laila that they dress up like a furry Barbie Doll.

Is this normal? It’s cute yeah, but come on! 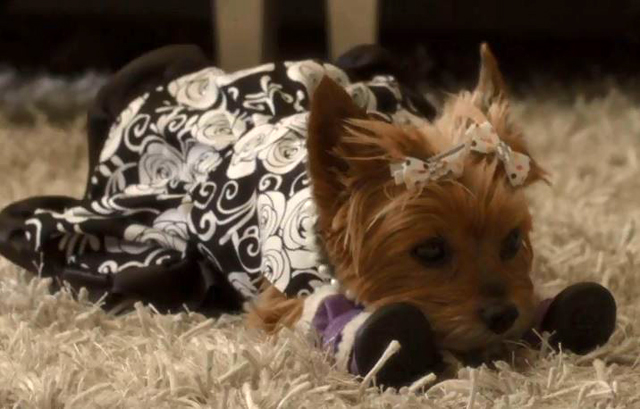 It becomes clear that the pups presence is filling some voids in the relationship. Jill (Shaina Vorspan) plays the part of the dog sitter and after a VERY rough week in her personal life finds out that Abby and Elliot will be moving to San Francisco. Faced with the thought of losing her BFF Laila, she does what anyone in that situation would do, she dog-naps the pup. This sends the Harmons into a frenzy as they try to get Laila back and the whole thing spirals into a calamity of funny situations as they try to chase down Jill through the South West. Kat (Kate Connor) Abby’s best friend joins the Harmons in their search and offers some great commentary along the way. We see a small role played by Richard Riehle (yes, the inventor of the Jump to Conclusions mat!) as the father of an inept PI that Abby and Elliot hire to help track down Jill.

Overall, this movie is a lot of fun. Brown and Walter did a great job in the writing and directing of this film. As the story unfolds you find that the characters are a lot deeper than you initially believe. Through the film you end up sympathizing with Jill, her character has a lot of personal struggles going on and Vorspan does a great job in the roll. Elliot and Abby’s relationship doesn’t seem so irretrievable and Laila steels the show with her cute and lovable innocent reactions to what’s going on around her. It’s no wonder this film was so well received at the festivals.